The following glossary of acid reflux terms is excerpted from Acid Reflux & Heartburn In 30 Minutes: A guide to acid reflux, heartburn, and GERD for patients and families (learn more about the book here) 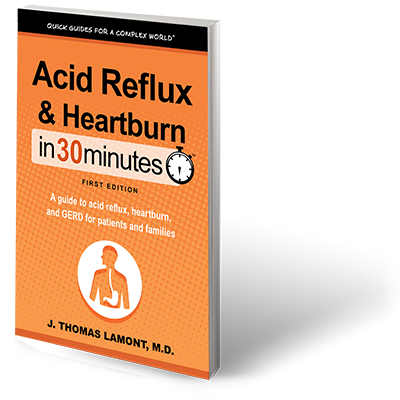 Acid blockers – Medications that reduce the production of stomach acid.

Alzheimer’s disease – A progressive brain disorder usually observed in older patients that destroys memory and thinking skills. There is no cure.

Angina pectoris – Indicates a problem with blood flow to the heart muscle.

Baclofen – A drug that helps treat heartburn by reducing reflux.

Barium swallow – Also known as an upper GI series, this is a diagnostic procedure in which the patient swallows a few cups of barium, a white chalky liquid that shows up on an X-ray of the esophagus and stomach.

Barrett’s Esophagus – An abnormal appearance of the cells lining the esophagus. In a small number of cases, it may progress to esophageal cancer.

Bile acids – A component of bile designed to help digest fat in the diet.

Bravo 48-hour pH probe – A 48-hour acid reflux study which measures the frequency and intensity of acid reflux from the stomach into the esophagus using a sensor.

Cholesystramine (Questran) – A drug that binds bile acids and prevents them from irritating the esophagus.

Diffuse esophageal spasm – Strong and persistent muscular contractions of the esophagus that cause chest pain.

Digestive enzymes – Helps your body break down and digest your food.

Duodenum – The first part of the small intestine just below the stomach.

Dyspepsia – A Greek word that means upset or sore stomach.

Esophageal manometry – A test that measures pressure waves in the esophagus, which can confirm the presence of a weak lower esophageal sphincter.

Reflux esophagitis – A condition associated with heartburn, difficulty swallowing, and with allergic symptoms such as burning or tingling of the tongue or throat after eating certain foods. Many of these patients have severe heartburn and evidence of acid damage to the esophagus.

Esophagus – The hollow, muscular tube that connects the throat to the stomach.

Fosamax – A drug used to treat osteoporosis that can also irritate the esophagus.

Gas bloat syndrome – An inability to belch and a feeling of distension or bloating, sometimes associated with anti-reflux surgery.

Gastric juice – A very powerful acid solution produced by the stomach that helps digest our food and kills viruses and germs in food and water.

Gastritis – Inflammation of the lining of the stomach.

Gastroenterologist – Also known as a GI doctor. These specialists concentrate on diseases of the digestive system.

Gastroparesis – A condition that limits the ability of the stomach after a meal. This is seen most often in diabetics and is called diabetic gastroparesis, but can occur in some patients who are not diabetic, so-called idiopathic gastroparesis.

Hiatus hernia – A condition in which the stomach pushes upward through the diaphragm into the chest.

Histamine blocker (H2 blocker) – Terms that refer to a type of acid-blocking medication. Examples include cimetidine and ranitidine. H2 blockers are considered excellent treatment for mild-to-moderate heartburn without complications.

Hydrochloric acid – A corrosive substance which is secreted by your stomach.

Hypersensitive esophagus – Also known as irritable esophagus, a condition in which the lining of the esophagus is very sensitive to even a small amount of acid.

Ibuprofen – Pain reliever that can lead to irritation and inflammation of the esophagus.

Laparoscopic Nissen fundoplication – A procedure in which the surgeon wraps the top of the stomach around the bottom of the esophagus, which strengthens the sphincter valve and prevents acid from going up into the esophagus after a meal. 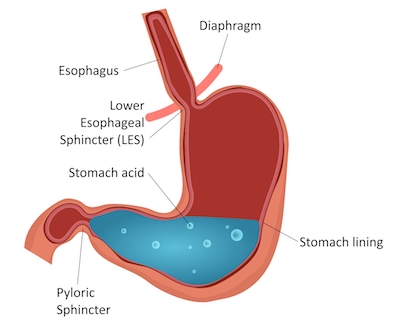 Lower esophageal sphincter (LES) – Sphincter that regulates the flow of food and liquid from the esophagus to the stomach. For most people, the LES prevents stomach acid from flowing upwards into the esophagus.

Naproxen – A nonsteroidal anti-inflammatory drug and pain reliever that can cause irritation and inflammation of the esophagus.

Nonsteroidal anti-inflammatory drug (NSAID) – A class of medications including Aleve, ibuprofen and similar medications typically used in high doses to treat patients with arthritis and rheumatism.

Pyloric sphincter – The muscle regulating the flow of partially digested food and liquid from the stomach to the duodenum, the first part of the small intestine.

Sphincters – Small muscles that act as valves to control the flow between different parts of your digestive system.

Upper endoscopy – A procedure in which an endoscope (a flexible tube with a light on the end) is passed through the mouth into the throat to directly examine the esophagus, stomach, and the top of the small intestine.

Wide open reflux – A condition in which stomach acid constantly moves upward into the esophagus.

This publication is designed to provide accurate and authoritative information in regard to the subject matter covered. It is sold with the understanding that the publisher is not engaged in rendering medical services. Nothing in this publication is intended to constitute medical advice, a clinical diagnosis, or treatment. The information in this publication is not intended as a recommendation or endorsement of any specific tests, products, procedures, opinions, or other information that may be mentioned. The information provided herein should not be used during any medical emergency or for the diagnosis or treatment of any medical condition. A licensed medical professional should be consulted for diagnosis and treatment of any and all medical conditions. Call 911 for all medical emergencies.